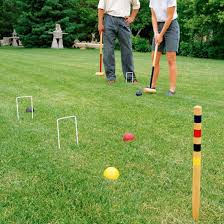 We started playing last year at the Cheltenham Croquet Club. It is one of the oldest and largest in the country, with eleven fine lawns. We were given three lawns in the morning every 2nd, 4th and 5th Wednesday of the month and the use of mallets and balls. The cost is £5 per person per session. Despite the fact that the season was shorter because of Covid-19, eighteen U3A members got to play.

Most people had never used a croquet mallet before or just a little socially. That did not matter. Members of the Club had volunteered to help them learn how to play Golf Croquet (GC) and join them in a game. In GC, which can be played as singles or doubles, each side has two balls and the first to get a ball through a hoop wins it. The players then play for the next hoop and so on until one side has won seven hoops. But you are not only trying to score a hoop yourself, you are also trying to prevent your opponents from doing so by knocking their balls away or blocking them so that your partner has a chance to score. So, there is skill involved, but also tactics, in equal measure. GC is a very sociable game, with four people on a lawn chatting away and having fun, especially when stealing a hoop from an opponent with an outrageous shot.

The way we ran our sessions, three U3A members first practised making the strokes required to run a hoop, place a ball and hit an opponent’s ball, with the help of a Club member. Then they played a doubles game with him or her and were introduced to the tactics of the game. As their skills improved, there was less coaching and more playing.

By the end of the season six U3A members liked croquet so much that they joined the Cheltenham Croquet Club. So, we have space for more players this year and a longer season to look forward to, from April to September. We will also have a chance to experience the other form of croquet, Association Croquet.